Wolf Alice was a headline attraction as part of the SWN Festival which has spread its wings out of Cardiff taking on new South Wales venues and that meant The Muni, Pontypridd! This Camden band unites a range of rhythms in order to create a kaleidoscope of cutting-edge contemporary alt. rock. The sounds spiral out of a series of 90’s nuances and catapults that ethos into the current arena. An energetic quartet was on fine form and the music wandered from a shoegazing sensibility through the realms of a range of contorted and competent constructions.

A full house is taken on a ride that mostly raises the roof or if needs be a more tranquil trail is traversed. A lustrous library of tasty tunes date back to 2013 and the material travels through the back catalogue onwards via singles, E.P.’s, the debut long player My Love is Cool and on to the forthcoming album Visions of a Life. There may not be excessive quantity but there is excessive quality!

The Midas of You loves Whore, Giant Peach, You’re a Germ, Fluffy, Freazy, Yuk Foo and more are great works of aural art so Wolf Alice have plenty of ammunition but can they deliver live?

Who is afraid of the big bad Wolf Alice?…….Nobody here! For this is a collection of hard-core devotees who thrive upon every nook and cranny of an extremely invigorating set. The audience is clued up on their heroes and there is a mutual respect between performer and punter.

The band all play their part and Ellie Rowsell leads from the front; and, she may be petite but this lady is a force with a diverse set of changes in tempo via a varied vocal delivery as at the same time she strums away with ferocity. Theo Ellis bangs away at his bass with bombast while whipping the audience up into a frenzy as if a winning goal was required in the dying seconds of a cup final. Joff Oddie scythes through his guitar with fire and skill as Joel Amey is a windmill of action on the drum set. Great Stuff indeed!

The music puts one in mind of the approach of Curve with additions of Joy Division, Lush, Salad, Hole with even pieces of classic rock circa Black Sabbath surfacing. Something for a tome of tastes but at no cost to the ultimate goals of energy, enthusiasm,
and enterprise! Wolf Alice came and made it a happy Monday at a venue that is successfully recreating itself as a community led outlet. A night such as this which also offered the entertaining Cynon Valley band Head Noise and their 80’s led extravaganza in
support will assist the cause of The Muni and there is a whole rafter of shows to look out for in the future.

However, for now, a major act has made a major impact to a very satisfied throng. For those about to rock salute the Beautifully Unconventional Wolf Alice!!! 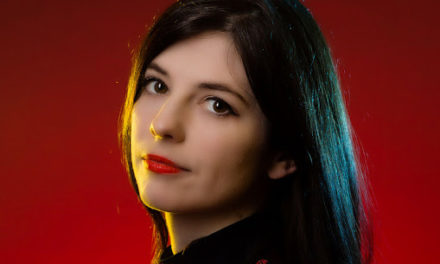 Living next door to Wolf Alice