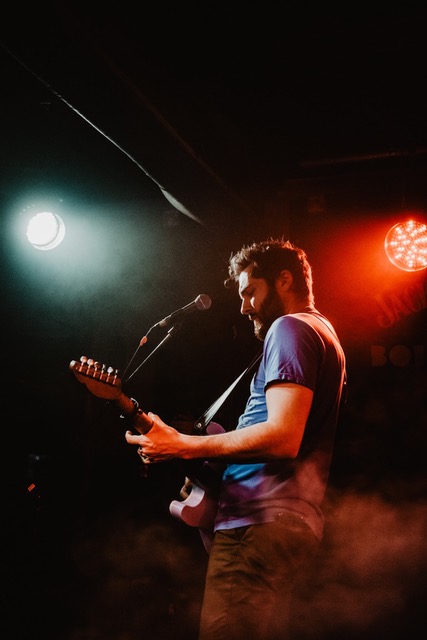 “One of my favourite guitarists has a new album out. Great songs with great changes and great playing”
– John Mayer
“he comes across like a laidback Springsteen, building an anthemic groove.”
– Rolling Stone
“Ariel Posen is guitar’s man for all seasons – he’s got the songs and the voice but he’s also a stellar slide guitarist with a gutsy, expressively melodic style”
— Guitarist Magazine UK
Following the release of his acclaimed new album ‘Headway’, Canadian songwriter and slide-guitar maestro ARIEL POSEN is delighted to announce a European Tour for 2022.

Taking in a total of 15 dates, Posen will bring his mesmeric live show to the UK for a score of dates, before venturing to the Netherlands, Germany, Denmark and Norway.

Tickets go on Sale from 10AM on Friday 9th April from:
https://www.arielposen.com/tour

Ariel Posen’s music occupies the space between genres. It’s a rootsy sound that nods to his influences — heartland rock & roll, electrified Americana, blue-eyed soul, R&B, Beatles-inspired pop — while still moving forward, pushing Posen into territory that’s uniquely his own. He turns a new corner with Headway, a solo album that finds the songwriter taking stock of his personal and musical progress.

Posen began recording Headway in December 2019, one week after wrapping up an international tour in support of his acclaimed debut, How Long. He’d been on the road for a year and a half, playing shows across the U.K., Europe, America, and his native Canada. Along the way, Posen had received standing ovations not only from his audiences, but also from outlets like Rolling Stone, who dubbed him “a modern-day guitar hero,” Music Radar listing him as a fan voted top 10 rock guitarist of the year and the Western Canadian Music Awards who nominated him for Breakout Artist of the Year. ”

Coming back home to Winnipeg, he began sifting through the new songs he’d written between tour dates. Many of them had already been tested on the road, their arrangements whittled into shape by a group of road warriors at the top of their game. Practically all of them were about the process of evolution — of making progress in life, love, and all points in between. Those themes were reflected in the music itself, which presented a crisper, clearer picture of Posen as a songwriter. If How Long had been his introduction to the roots-music world, then Headway was something different: a sharply-defined snapshot of a musician who has truly crystallised his sound.

Like its title suggests, Headway is all about growth. Already celebrated as a frontman, multi-instrumentalist, and producer, Ariel Posen hits a new high-water mark with his second album — an album that prioritises songwriting above all else, showcasing the progress of a lifelong musician who’s still in the middle of an upward trajectory.

For album requests, interviews, or anything else, please contact:
thom@sonicpr.co.uk

FURTHER PRAISE FOR ARIEL POSEN
“He cannot be stopped. …showing off not only his guitar playing but his songwriting” – Talia Schlanger (On CBC q)
“smooth, soulful… The expertly self-produced sound is a nice mixture of slide guitar, bass, and that popping percussion, with Ariel’s creamy vocals on top.” – Great Dark Wonder

“I couldn’t believe it when I heard Ariel’s record. I knew he was a great guitar player, but DANG IT….he’s really really good….I also didn’t know how well he could sing or write songs. There’s so many bangers on this record, but “Fade” is for sure my favourite!” — Cory Wong (Vulfpeck)
“Ariel Posen is guitar’s man for all seasons – he’s got the songs and the voice but he’s also a stellar slide guitarist with a gutsy, expressively melodic style” — Jamie Dickson (Guitarist Magazine UK)

“Posen is a rare breed of guitar player. He has managed to meld a keen sense of theory and half a centuries worth of influences into a unique style that is all his own.” — Michael Lux (Reverb.com)

“Individuality is the centerpiece of Ariel’s sound. His wizard-like slide chops and razor-sharp songwriting skills have helped him find a singular voice that continues to combine innovation and inspiration.” — Jason Shadrick (Premier Guitar)

“Ariel Posen is one of the most toneful and tasteful players to emerge in recent years – miss out on his new album at your peril!” — Chris Vinnicombe (The Guitar Magazine UK)

“Posen is a rare breed of guitar player. He has managed to meld a keen sense of theory and half a centuries worth of influences into a unique style that is all his own.”