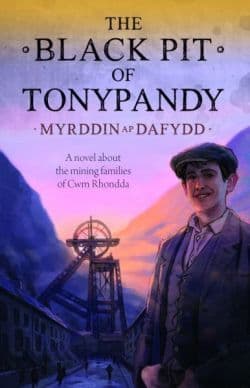 BookSlam is an annual competition for primary schools in Wales and is based on reading English-language books. A Fab 4 year 5 group from a Rhondda school put on a polished performance in front of the Bookslam judge. The Cwmclydach Primary children were immense and they created a great deal of pride for themselves, the school and their guiding force of www.worldofwords.education proud.

World of Words work with year 5 and 6 children at the school and the Cwmclydach hierarchy asked WOW to lead a charge towards the Bookslam showdown. The children have worked hard to prepare a presentation that on the day was first class. Their chosen text involved hours of analysis over a hectic several weeks but it was well worth the effort. There was even a chance to speak with Myrddin via an online link.

The Black Pit of Tonypandy by Myrddin Ap Dafydd was noted by the Bookslam judge as the most advanced of all the books on offer for the contestants to study. The themes in the book were a challenge for young minds to take on board. The harsh realities of 1910 poverty in Tonypandy, the Rhondda and South Wales Valleys were explored form a number of angles and the struggle to survive for the mining families was a particular focus of the contents. The inquisitive children of Clydach Vale pulled out all of the stops and they were relentless in their search for more knowledge and the push for professionalism was a pleasure to experience.

The Bookslam test has given so much learning and so many experiences, but this quartet of exceptional talents can give us so much hope for the future. One must also say that a group of other Cwmclydach youngsters also studied the story and they were also to be applauded but the final four that came out of the hat overcame the pressure of their big day under scrutiny and displayed their potential. Well done to all of the Cwm kids who played a role in Bookslam 2022!

Sainsbury’s Pontypridd Making a Positive Difference to their Community this Easter.

The happy jacks of Penygraig.