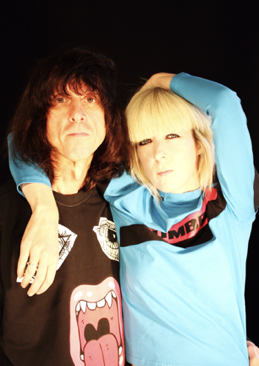 WITH SUPPORT FROM ROB AUTON, BUG CLUB, AND GWENIFER RAYMOND

NUMBER ONE SELLING NEW ALBUM ‘I AM MORON’ OUT NOW!

The Lovely Eggs do not give up. Ever. The proudly independent Northern psychedelic punk rock duo have now, since the beginning of the pandemic, rescheduled the tour originally intended to promote the release in April 2020 of their ‘I Am Moron’ album, a staggering seven times. Now, they can finally return to the stage in full force, with a string of live shows set to take place in Spring of 2022.

These shows will be a long-awaited celebration of the critical and chart-topping success of ‘I Am Moron’, and collaboration with Iggy Pop for the ‘I, Moron’, released last July via their own label, Egg Records.

“Being in The Lovely Eggs we’re kind of used to surreal experiences but collaborating with Iggy Pop takes the biscuit,” exclaims Holly. “It’s actually unbelievable. For him just to say nothing but “moron” over and over again fitted in with the sentiment of the song perfectly. He just GOT it. We are all morons. In a world of moronic things. In a world of moronic ideas. You are moron. I am Moron. We are Moron.”

Joining them will be a three support acts that exist in the same world as the band’s eclectic, out-there sound: Rob Auton, Bug Club, and Gwenifer Raymond. Labelled ‘a genuine original’, Rob Auton Rob has written eight hit Edinburgh Fringe shows, which have led to nationwide tours and television/radio appearances. Bug Club are a trio currently turning heads, hearts, eyes and ears following the release of their debut EP ‘Launching Moondream One’ in early 2021 through Bingo Records. Finally, Gwenifer Raymond is a master songwriter, taking from the sounds of the Welsh Valleys and Appalachian Folk for an adventurous embrace of compositional tradition.

Catch The Lovely Eggs and support live at the following dates in 2022: