Magic Marcelo and the football fan 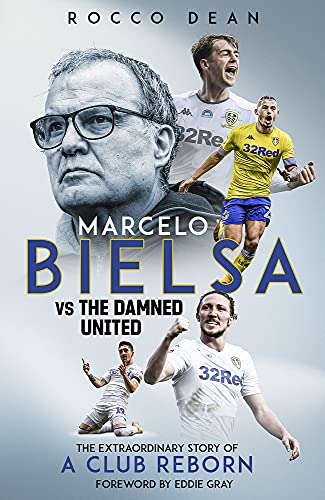 Marcelo Bielsa vs The Damned United : The Extraordinary Story of a Club Reborn is a well-written book from the pen of Rocco Dean who started recording his memories as a side-line to his career in the family business – but, then he got hooked and has now catalogued a series of releases. This 255 page reading ride is a heartfelt and honest account of the perspective of a football fan through a series of trials and tribulations with a travesty leading to triumphant outcome.

Spread across the two seasons of 2018/19 and 2019/20 the author starts with the introduction of the legendary and worldly wise Marcelo Bielsa being appointed as manager of the ill-fated and once mighty Leeds United FC – who had been on a 16 year exile from the hierarchy of English soccer. Calamity and controversy are never far away from Elland Road and in season one a rollercoaster ride had Leeds flying high for periods but then the infamous ‘Spygate’ scandal, injuries, limited playing resources, adversity and the seemingly all to usual Leeds fallout resulted in a conclusion that was not the intended goal. Misery where magic was the proposal – once again appeared to follow the Yorkshire club like the ultimate albatross.

Therefore, it was on to the next campaign, where despite a series of ups and downs the colossal credits outweighed the debits and the team had their desires fulfilled when they became Championship winners and gained their entry back into the Premier League.

Just another round ball tale the unknowing might think but there is far more to the affair than a game. The day to day nuances of being a football obsessive are highlighted, where:

*The rituals of going to a clash must be planned – be it fish and chips, a pint in a specific pub or breaking lucky or unlucky routines

There is so much more and Dean exemplifies the religious fervour of being a supporter – and, as he states Leeds were not his first love, but after getting an insight in to their orbit he was sold. From there it went from dipping a toe to a total submersion in the tsunami of Leeds United – and, it took the brilliance of Bielsa to take Rocco and countless others from the depths of despair back to the exalted heights of the greatest football league in the universe. This tale is given a different spin by the writer where the hurt and the humour comes to the fore – and, it is therefore an extremely entertaining artefact. Reading for any weather when Marching on Together!