by
Rob Jones
The essence of Joy Division united in 1976 and sadly dissolved in May 1980 after the suicide of lead singer Ian Curtis. However, the band left a legacy that is still revered. The remaining Joy Division trio formed New Order and have achieved even greater success. However, The influence of Joy Division was far greater and as a post-punk pioneer their star shone brightly and has remained to enlighten both an array of acts as well as a plethora of punters. Over 40 years since those early days the tribute band entitled Transmission travel far and wide spreading the gospel of Curtis, Hook, Sumner and Morris.
In November 1979, Buzzcocks and Joy Division did not sell enough tickets for a gig and as a result their date at the now long lost Sophia Gardens venue in Cardiff was cancelled. Unfortunately, I had bought my means of admission and over the years have felt aggrieved that this show did not take place and my chance of seeing the mighty Joy Division had vanished. Therefore, recent annual visits to Cardiff by Peter Hook have helped soften the blow of my seventies debacle. To add to which Transmission could also offer a chance to sample those seminal sounds. It may not be the real thing but like minded folk gathered at Clwb Ifor there was hope that a piece of pop panache could be recreated.
So was it?
Well to give them their dues this four piece do a fine job of reviving the spirit of Joy Division and there can never be another Curtis so attempts to replicate his style would not appear to be fitting.  However, Hook does a good job when he plays without aping the choreography of Curtis. Transmission can also lay claims to offering a fitting representation as they honour their heroes by musical means and the images transported on a screen to their rears offers a visual representation of the real deal. The likes of the soaring singles and cuts from the classic Unknown Pleasures and Closer albums fuel the fire and everybody present can adopt a ‘dance to the radio’ mentality. Transmission have been at this game for a number of years and they have worked hard at their requisite craft – and when Paul on guitar took vocal duties the poise of the past was more precise. This seasoned quartet pick up on the nuances of their icons throughout their development from nascent new noiseniks to accomplished aural ambassadors.
The highlights were aplenty but during an hour plus set those tunes that hit the spot with rich aplomb were: Dead Souls, Shadowplay, Isolation, She’s Lost Control, Disorder, Digital, Heart and Soul, Ceremony, Love will tear us Apart and obviously Transmission. It is certainly worth the admission to see Transmission! 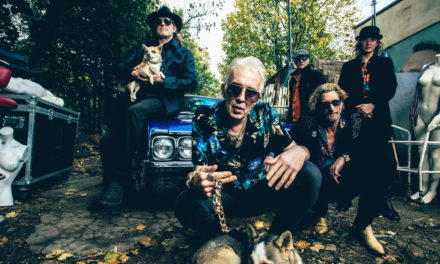