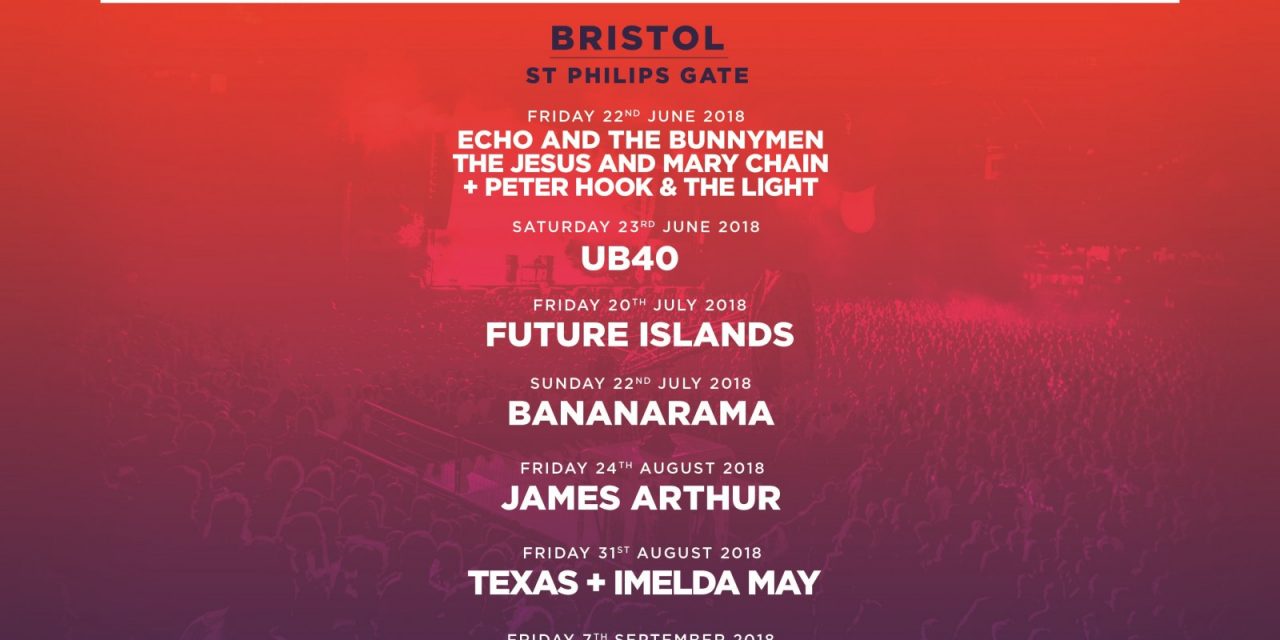 Boasting a dazzling array of top flight musical talent, the Skyline Series will be featuring specially curated billings night after night and playing host to the likes of Texas + Imelda May, Bananarama, James Arthur, Garbage and many, many more.Taking place across a number of weekends at the height of British Summer, these open-air, inner-city concerts will be held at the St Philip’s Gate area at the centre of Bristol.

Back together with their original line up and more popular than ever, BANANARAMA follow their mega series of sell-out UK shows with an appearance at Skyline Series on 22 July 2018. The trio of Sara Dallin, Siobhan Fahey and Keren Woodward will be serving up a delectable sundae of summer smash-hits from their canon including ‘Venus’, ’Robert De Niro’s Waiting’, ‘I Heard A Rumour’, ’Cruel Summer’ and so many more.

With his sultry tones set to stun, JAMES ARTHUR will be delivering the emotional goods to St Philips as he checks in to the series on the 24 August 2018. Originally from Middlesborough, James of course shot to acclaim upon winning the ninth series of The X Factor in 2012. Now 29-years-old, the star has grown into the accomplished artist the public always knew he would with his sublime vocals continuing to shine on hits including ‘Impossible’, ‘You’re Nobody ‘til Somebody Loves You’ and ‘Say You Won’t Let Go’.

A week later (31 Aug 2018), Skyline brings you a formidable pairing of fiery, female-fronted performances as TEXAS and IMELDA MAY share the stage for an immense double-billing. With founding members Sharleen Spiteri and Johnny McElhone still at the helm, Texas have been ratcheting up the hits for over 30 years now with an astounding thirteen UK top ten singles, three UK number one albums and eight UK top ten albums to their name that have shifted over 40 million records world wide.  Sharleen and co. will be bringing the tour for their latest critically acclaimed, top 10 denting album ‘Jump On Board’ to the West Country for this special show.  Setting the paces for the evening, the tempestuous force of modern rockabilly star Imelda May will storm the Skyline. The Irish singer, songwriter and multi-instrumentalist received radiant reviews from the likes of The Independent, The Daily Mail & Q  for her impassioned 2017 album ‘Life. Love. Flesh. Blood’ and will be performing tracks from the record and more.

Fresh from accepting a career-crowning NME Icon Award award, Shirley Manson will surely be in buoyant mood and out to show Bristol why GARBAGE remain as relevant in the contemporary landscape as they ever have. With a canon chock full of grit, grunge and great riffs, the Madison alt-rock supremos will be launching into the likes of ‘Only Happy When It Rains’,  ‘Queer’, ‘Empty’ , ‘Stupid Girl’ and more on 7th September 2018; not to be missed.

Also amongst the quality, established acts making up the impressive roster are UB40, Future Islands, The The, Echo & The Bunnymen, The Jesus & Mary Chain and Peter Hook and The Light, with more acts still to be announced.

But the Skyline Series is not just about having a good time watching live music… Each night will feature a unique food village bustling with an exciting variety of the finest local street food purveyors, plus innovative pop up restaurateurs from all across the UK. In addition, there will be plenty of full service draft bars to quench that festival thirst, not to mention specialist VIP bars featuring local and craft beer, wine, bubbles and creative cocktails for all tastes as supplied by local drink artisans and brands.
Bringing the very best music, food and drink together in the vibrant heart of the city, the Skyline Series will be way for a summer of unforgettable events as iconic as the Bristol skyline.

Tickets are on sale now, available from:
https://www.skyline-series.com

All artists are available for interviews. For any requests, please contact:
rob@sonicpr.co.uk