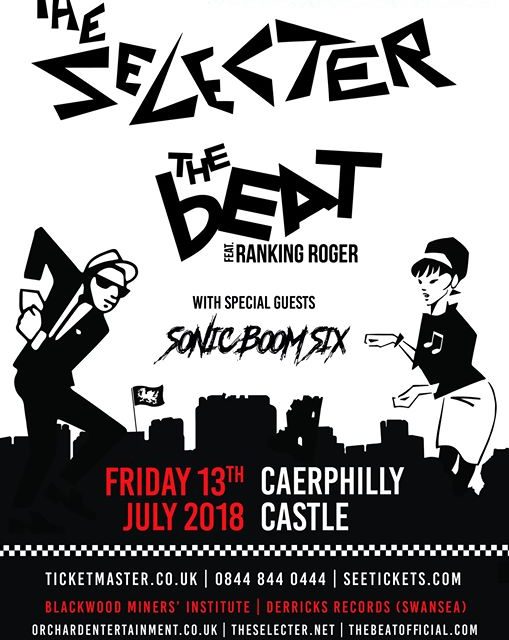 by
Rob Jones
Ska legends The Selecter and The Beat (featuring Rankin’ Roger) are joined by Sonic Boom Six in order to create Friday night dance fever at Caerphilly Castle on July 13, 2018.
The Selecter are fronted by the enigmatic Pauline Black and their renowned tunes include the classic singles – On my Radio, Missing Words, Too much Pressure, Three minute Hero and The Whisper. As a live experience the band have maintained their momentum and Black is still in fine fettle as a leader and vocalist.
Meanwhile, The Rankin’ Roger led version of The Beat are no strangers to the Welsh valleys as those in attendance at a yesteryear Cwmparc Parc Hall show can confirm.
The charts were also a better place for the appearance of hits and the double A side single was a particular forte of The Beat e.g. Tears of a Clown/Ranking full Stop, Best Friend/Stand down Margaret and Hands off She’s Mine/Twist and Crawl plus Mirror in the Bathroom, Drowning, too nice to talk To,  Doors of your Heart, save it for Later and Can’t get used to losing You.
Sonic Boom Six are a Mancunian five-piece. Kerrang! describes SBS as “taking ska, pop, grime, dubstep, punk and metal apart, then rebuilding them as a hyperactive hybrid”. The band’s thrive on social commentary and that is activated by a ,ove of Bad Brains, Public Enemy, The Fugees, The Specials, The Streets and The Clash.
Tickets are available through: www.ticketmaster.co.uk | call 0844 844 0444 | Blackwood Miners’ Institute | Seetickets.com | Derricks Records (Swansea)

For more details go to:
http://orchardentertainment.co.uk/gigs/2018/