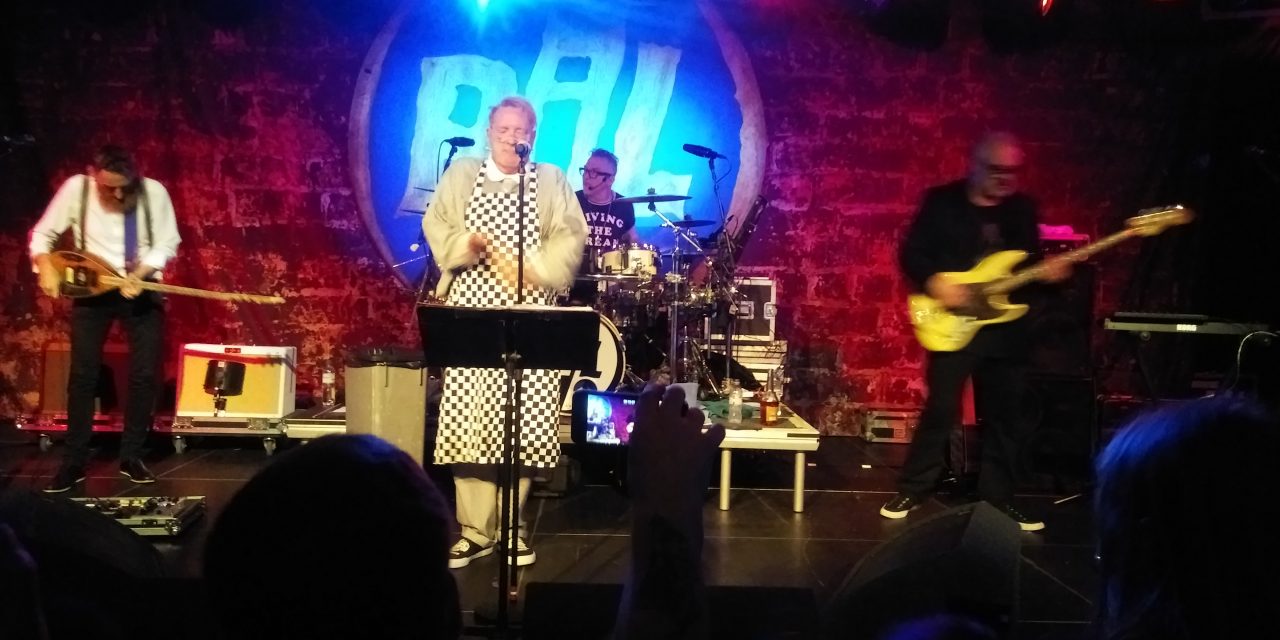 by
Rob Jones
John Lydon and his present PIL posse arrived at The Tramshed, Cardiff to mark 40 years of a band that in its infancy help re-define rock music. The illustrious albums: First Edition, Metal Box (a.k.a. Second Edition) and Flowers of Romance broke barriers, created canvasses and delivered diligence. The input of Keith Levene was central to all three long players and Jah Wobble was core to two with of course Mr. Rotten to the fore. Since those halcyon days Wobble and Levene are long gone. However, the new The Public Image is Rotten (Songs from the Heart) – 5CD/2DVD or 6LP vinyl set collates career highlights and is a must have purchase for anyone who has ears! Yes, the contents are that special!
The group has had many members, split and reformed and in its current format of Johnny, Scott Firth, Bruce Smith and Lu Edmonds a quartet has now been back in their own groove for several years. The 2018 PIL dip their toes in to long players from across the combo’s four decade history and the audio excellence of 1978-81 creates a handful of delights. Henceforth, the Welsh public are treated to a very good take of Memories, a contorted/distorted Death Disco, a 12″ mega mix of the Flowers of Romance single and a pumped up Public Image encore performed in its 7″ supremacy.
To add to which the 80’s radio friendly alt. rock joys of both This is not a love Song and the anthemic genre crossing Rise are given good outings and other minor hits from that decade such as Warrior and The Body are also delivered with aggression and a renowned tendency to extend the ranks of the song length. Newer material such as The One and I’m not Satisfied also appear as does another blast from the past in the form of 90’s nugget – Cruel.
Bass player Scott wore a jacket covered in the names of Metal Box anthems e.g. Poptones, No Birds, Albatross and Bad Baby which were emblazoned on its cloth. However, unfortunately we are not going to hear these gems but instead Lydon turns to other numbers and also his allegiance with Leftfield as we close with an extra extended version of Open Up complete with bonus blaspheme which the crowd lapped up.
In between tunes the baron of banter talks with his troops and that means our John having a laugh as he admits to being a bit worse for wear after a heavy night at the 100 Club, London only 24 hours previously. He giggles with a variety of comments in particular that he was working at getting worse and that the punters were tolerant of the show. However, far from it the fans were in their element even though their idol is a long way from the Filth and the Fury of yesteryear youth – but, at 62 he is still full of attitude and energy.
This gung ho guy can still put on a show and bawl to the point that one feels he must be in agony via the amount of application installed. The band are to be applauded as well as they bond in to a tight unit and a range of instrumentation is utilised because the fact PIL is a multi-trick pony. So there you go! The king is not dead and he is not forgotten – go and get The Public Image is Rotten!