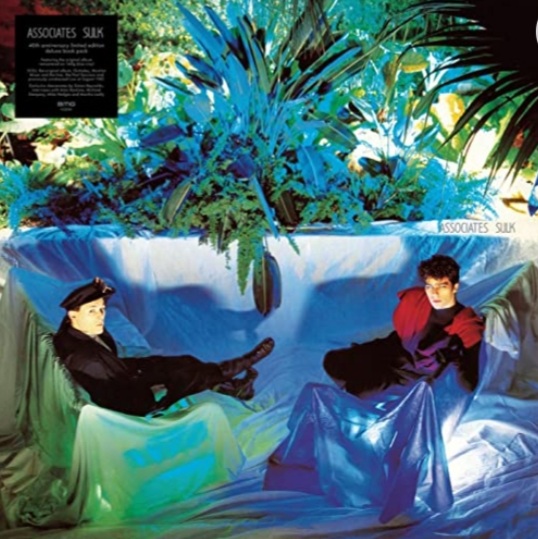 Those who lackadaisically traversed the 80’s might have recalled these Scottish sound structuralists as a band of a handful of hit singles and several long players. However, in the core of a career which mostly spanned 1979-1990 this cutting edge combo touched the hearts and heads of both many a punter and performer.

I have ventured deeper into this expansive landscape via a series of merchandise and to head back to a vastly enhanced Sulk offers nothing but admiration and adoration for The Associates.

Initially and incorrectly placed in to the arena of 80’s ‘Smash Hits’ electro elegance their legacy is more late time John Peel than day time Simon Bates. The sadly now departed Billy McKenzie kicks on from the front with his own tagged “Abba meets Bet Lynch on acid” approach and his sidekick Alan Rankine aids and abets the cause leading a bevy of beautiful and brutal beats.

The 10 tracks that took the long player in to the upper reaches of the charts scored nearly 250,000 sales – and, the Mike Hedges production certainly assisted the cause of a multi-faceted record for beneath that shiny leftfield exterior hides many breezy angular interiors.

Billy called for the sound of the sun coming out after a rainfall – and, the blend of the light and the dark is apparent here. Such textures take the listener on a journey that is unparalleled and this glitter meets bitter bond makes for a path of pop perfection.

We head from the 60’s in to the future absorbing a bevy of Transatlantic and European influences with a totally professional but no holds barred drive. Genre Skipping hops between art rock through Bowie, disco, glam, minimalism, balladry, cabaret and new wave. The overwhelming post-punk experimentation added to modernist meanderings creates a Phil Spector panorama with Keith Levene touches aplenty.

Rankine admits that it was not formulaic but ‘everything plus the kitchen sink from the off’ and his cataloguing has it down as ‘mad music’ which eventually captured the sound required .

The section of the release pinpointing the many faces of pivotal tunes such as era anthems Party Fears Two and White Car In Germany also further extends the elevated place of The Associates in the aural annuls. When we also dip into mainstream masterpieces such as Club Country, 18 Carat Love Affair/Love Hangover and Waiting for the Loveboat and mix that majesty with an array of powerful tracks, session gold and on stage gusto we are left with a dynamic document. From Gloomy Sunday to happy Mondays, it is captured on disc and please also head to Tom Doyle’s book: The Glamour Chase: The Maverick Life of Billy Mackenzie for a deeper insight into a turbulent tale which ended when the acclaimed singer tragically took his own life aged 39 in 1997.

Sulkis silk! The unfathomable outsiders punch panache and supernatural style. The genius of Mackenzie and Rankine was not truly celebrated in their day, but that phenomenal force can be absorbed and cherished many moons on . Perhaps, It’s better this Way.

The regal remnants of The Fall return as Imperial Wax