Clydach Vale Walking football is on the up 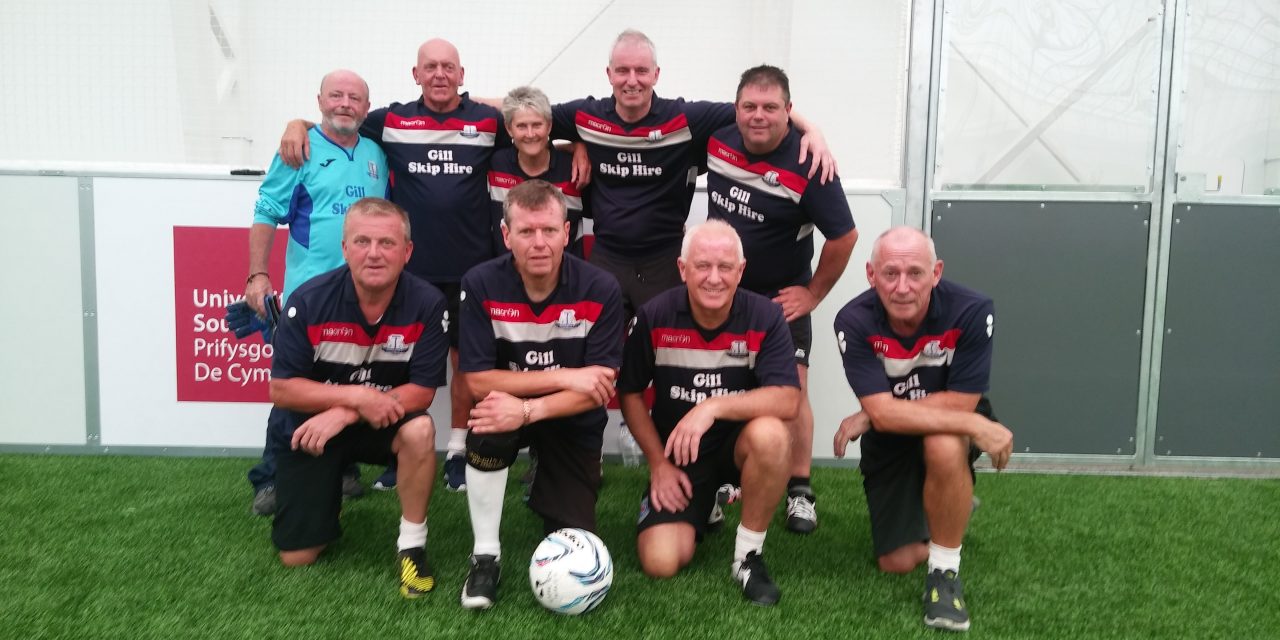 The walking football at Cambrian 3G, Clydach Vale is most definitely growing in its appeal and impact. The coach Rob Jones has taken a day time session that was low in numbers and developed the attraction in to a popular evening get together on a Tuesday evening, 7-8pm. A bargain £3 admission has led to a range of persons enjoying the fun, fitness and football element of a gathering that has several different productive elements within its core.

The proceedings took on a new dimension as the Cambrian group entered a team in the Welsh Championships at the USW 3G pitch off Treforest Industrial Estate and this indoor facility was hot indeed on another boiling summer day. A squad of Dean Williams, Phil Jones, Lyndon Murphy, Ricky Morris, Kevin Adams, Gail Lewis, Michael Gill, John Ridley and Rob Jones entered the event and none teams in total were in the tournament. To add to which Gail was the only lady playing on the day and she was a star turn in a team of six that took to the field.

Cambrian were put in a group with Merthyr Town – the victors of the last two years, a well travelled and acclaimed Neath Communities team and the well established Hawthorn side. Cambrian raced in to a 2-0 lead against Merthyr thanks to two sumptuous strikes from Ridley. However, the experienced opposition fought back to claim a 2-2 draw. Cambrian then moved on to Neath and the eventual group winners took a 3-1 scalp with Morris getting the goal for the defeated team and Phil Jones was extremely unlucky to have a fine strike chalked off as the advantage rule had not been applied. Cambrian had to win their final match 6-0 to qualify and despite hitting the post four times and the bar once as well as their opponents having a brace of players sent off a 4-0 triumph was not enough. Ridley notched a hat trick and Rob Jones bagged one to notch a notable victory but there was the obvious disappointment of being so close to the semi finals. There were fine performances on the day and none better than Murphy was marshalled the defence plus well done Williams for taking up a slot between the posts and showing his grit and determination.

However, Cambrian had only managed one hour of training within the previous month as World Cup fever had been rife in the community! At the USW festival everyone was given good game time added to which it was a Cambrian competitive debut so it was a decent showing and there are now hopes of attracting more folk on Tuesdays and hopefully playing further opposition with the possibilities of games against the Abercynon walking football set up, local firefighters and the lure of further knockout clashes.

There have been more people coming along to the workouts on the futsal pitch at the 3G facility and some have taken up this weekly option as a regular part of their well-being programme. For more details of the Clydach Vale sessions call Cori Williams on 01443 442743 or 07791 038918 or email cori.villagetrust@hotmail.com

Pupils are bowled over by new cricket club.