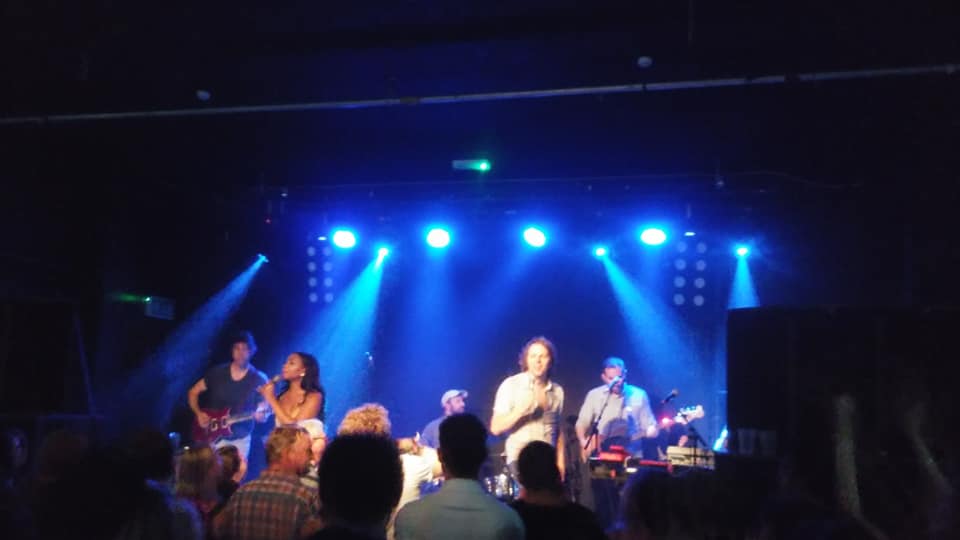 Hurrah! The American aural army !!! (Chk Chk Chk) have eventually delivered their dance delirium indie-punk-funk in Wales! Yours truly did not think it would happen but what a pleasure it was to be present at The Globe in Roath, Cardiff for the arrival of this hidden treasure. This band in a six piece format should be getting a lot more commercial kudos because their beats are both boisterous and brilliant – and, as a live entity they proved themselves to be right up there at the top of the tree.

Catchy hooks front thumping tunes and the whirling dervish that is Nic Offer leads proceedings as if his life depends on it! His non stop ecstatic cabaret is a sheer joy to behold and that is even the many tongue in cheek moves. This guy has to be seen to be believed as he does not come up for a breath. Cosmic choreography and boundless bombast spark his action as he shifts from the stage in to the audience with ease and mingles with his disciples without a care in the world.

The banter was comical and the link up from vocalist to the mosh pit general Jeff afforded a great deal of hilarity. The singer asked the fan who had been his favourite live act of the year and the punter replied ‘Bjork’. Offer then demanded that his already lively group ramped up the rhythms in order to outdo the Icelandic pop princess. This challenge was taken up and the success led to an additional encore. Admittedly Jeff was under a lot of pressure when asked by Nic if !!! had hit the spot – especially as the gathered throng were demanding more music!

This was indeed an energy infused evening of celebration and happiness – giving off enough energy to power the national grid! The main attraction meandered through their career utilising the wonderful Louden up Now album (please listen – if you have not already!) and paying particular attention to more recent triumphs in particular the 2017 Shake the Shudder long player and beyond.

The public were under the spell of Offer and his troops backed the cause with a sonic tonic that can only result in busy feet. On a personal level I am tired of walking in to any shop and hearing non dimensional chart drivel when the likes of !!! are constructing such dynamic diligent ditties which should be here, there and everywhere!

Seven albums in and never a dull moment! There cannot be anything but delight when the produce is so polished but the cutting edge applied makes the goods even more satisfying. The output is fired out of a cannon equating to a physical jolt that makes one glad to be alive. Superlatives are simply not enough to describe the !!! (Chk Chk Chk) experience – sample it on record but even better absorb the live blast. Chk Chk Chk it out!!!