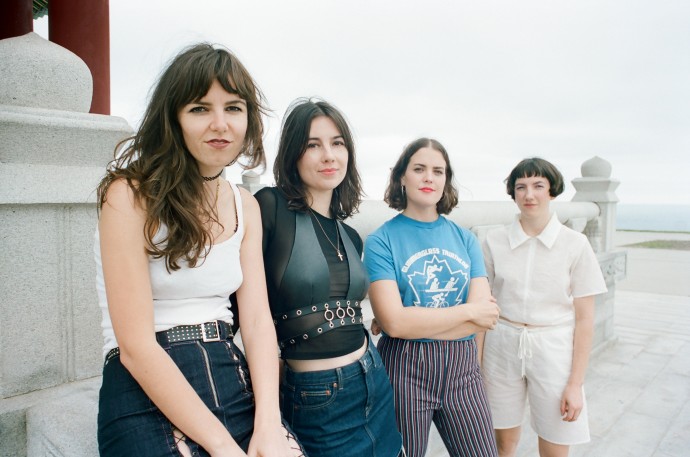 TAKEN FROM EP2 OUT MAY 3rd ON PARTISAN RECORDS

“Their self-titled EP is really a masterclass in lines that creep up on you and resonate.” – NME

“It’s impossible not to fall head over heels for them.” – DIY

Rising Sydney-based “trash can girl band“ Body Type have shared a new track + video from their upcoming EP – out May 3rd via Partisan/Inertia. ‘Free To Air‘ is helmed by lead guitarist Annabel Blackman, and the accompanying video (dir. by Matt Griffin) weaves from a face swap bizarro world to the vegetable aisle. Watch HERE and feel free to share.

“‘Free To Air’ is about an old neighbour whose life seemed to play out entirely in his lounge room in front of the TV, which he blasted day and night. My bedroom faced looking into his lounge room, so it was almost like we were waking up and watching the morning news together or having a TV dinner after work…it was definitely not that romantic in reality though. We invited the esteemed video artist & 10/10 person, Matt Griffin, to make a video for the song because he is a master manipulator of screens and could slice us into an assortment of scenes and onto bodies without needing us to be physically present, which is the perfect disembodied embodiment to accompany the song.”

Body Type are fresh off their first-ever trip to the US, having played SXSW and their first headline shows in the States. In Australia they’ve toured with POND, Alex Cameron, Rolling Blackouts Coastal Fever,Japandroids, Frankie Cosmos, ,Big Thief Ariel Pink + more. The band head to the UK for their first shows on these shores this May, including slots at Live At Leeds, Hit the North and Great Escape festivals, as well as a headline London date at Moth Club on May 15th. They were also recently featured in Julia Jacklin‘s video for her song ‘Pressure To Party‘.

Along with the digital release of the EP, the band will be releasing a double-sided 12″ for the first time, featuring EP1 on Side A & EP2 on Side B – it’s out June 28th on Partisan/Inertia. It is also available as a Rough Trade exclusive on limited edition slime-coloured vinyl. Pre-order it here: https://bodytype.lnk.to/EP2