Hundreds of learners graduate with the Open University in Wales

Monday (4th November), at the Wales Millennium Centre, over 350 students graduated from the Open University in Wales, in what is one of the university’s annual highlights. Most have studied part-time, often balancing this with work, family or caring for a loved one.

The OU was founded over 50 years ago. In that time, more than 200,000 students have studied in Wales alone.

It now has over 10,000 students across Wales, 42% of whom come from the country’s most disadvantaged areas. 2/3 of students are either in part time or full time work during their studies.

The OU in Wales presented honorary degrees to Dr Donald Berwick, former chair of the Centres for Medicare and Medicaid under US President Barack Obama; Sir Paul Silk, chair of the 2011 Commission on Devolution in Wales; and Professor Dame Elan Closs Stephens, the Electoral Commissioner with responsibility for Wales.

In 2013, Dr Berwick was asked by then Prime Minister David Cameron to lead a review into patient safety, following the Public Inquiry into Mid Staffordshire NHS foundation trust. The review’s recommendations are leading to considerable changes in the health service. These include greater transparency and using measurements for quality improvement.

Sir Paul Silk was chair of the 2011 Commission on Devolution in Wales, better known as the Silk Commission, which led to a clearer set of legislative powers for Wales. He is also currently studying languages with the OU.

Dame Professor Elan Closs Stephens chaired S4C for two terms from 1998 to 2006 and in 2006, she headed the Stephens review into the arts and its relationship to government and society in Wales. She is also the member for Wales on the BBC Board, and is chair of BBC Commercial Holdings Worldwide.

“It is a huge privilege to be honoured by a University that is so important in our society. I have admired the Open University since its inception half a century ago. The University has opened the door to so many at a time when only a small percentage gained degrees and it has also done pioneering research. I am also proud of the association with the BBC from the start right through to our present substantial partnerships. Thank you OU.”

“I am honoured and excited to be recognised in this way by the Open University, especially in the year of its half-centennial. The university is an institution that is so important in our national life, and it is one that has given cultural, intellectual and scientific stimulation to so many people from all walks of life, of all ages and throughout the country – including me.”

“It may be unfashionable to say it, especially in current circumstances, but politicians of all parties do, by and large, care about improving the lives of their fellow citizens. Harold Wilson and Jennie Lee’s vision 50 years ago in establishing the Open University is a brilliant example of that and having worked a little with Harold Wilson in the 1970s, I am particularly proud to become an honorary graduate of the University he founded.”

Louise Casella, director of The Open University in Wales added:

“We’re so excited to be celebrating with all our graduates today. Our ceremonies are a chance to reflect how hard they’ve worked whilst balancing a job or caring for a loved one. It’s also their chance to thank the family and friends who have supported them too.”

The Open University was founded 50 years ago. In that time, more than 200,000 students have studied in Wales alone. 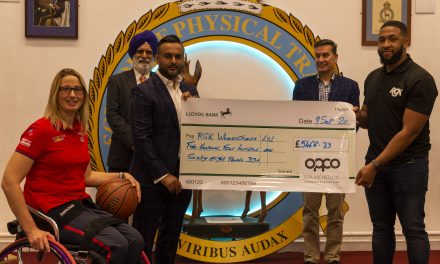