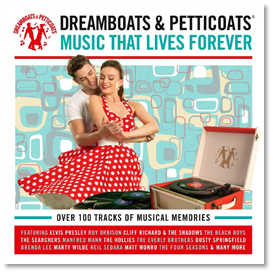 DREAMBOATS & PETTICOATS HAS BECOME THE CD THAT FANS BUY FOR CHRISTMAS

It started as a compilation album, then spawned a hit West-End musical. Now, Dreamboats & Petticoats is set to develop further as it moves into the live arena in 2021 with a UK tour headlined by Marty Wilde, the Godfather of British Rock & Roll.

Before that comes the eagerly awaited new compilation album. The annual Dreamboats & Petticoats compilations have become the most anticipated – and biggest selling – albums of the year, bucking a trend towards streaming and providing fans with 4 CDs of timeless, quality Rock ‘n’ Roll.

For the last five years, each new edition has sold well over 100,000 CDs – a figure now virtually unheard of in compilation sales. Nearly 5 million records have been sold across the series, making Dreamboats & Petticoats one of the most successful compilation brands of all time.

This year, Decca Records presents Dreamboats & Petticoats ‘Music That Lives Forever’. A celebration of the timelessness of the Rock ‘n’ Roll era, featuring 100 classic songs as well as a bonus track, ‘60s World’, newly written and recorded by one of the greatest British voices of them all, Marty Wilde.

The set kicks off with The Beach Boys ‘Wouldn’t It Be Nice’: one of the most exquisite pop songs of all time. Released in 1966, in the UK it was the B-side to ‘God Only Knows’, which hit No.2 in the chart. The song was also the opening track on their 1966 masterpiece Pet Sounds.

Other highlights – there are many – include:

·         The Shadows ‘Apache’: Hank Marvin’s pioneering tremolo sound propelled The Shadows to No.1 in 1960 with Apache. The band and the song are celebrated with a new 60th anniversary companion title ‘Dreamboats & Petticoats Presents The Shadows: The First 60 Years’. Released on 13th November 2020, the collection features 40 sensational Shadows tracks, hand-picked by legendary guitarist Bruce Welch.

·         Elvis Presley ‘Wooden Heart’ a No.1 hit in the UK and across the world, this tender little song with its chirpy accordion and a verse sung in German, was originally recorded on 28th April 1960 for the Elvis Presley film G.I. Blues.

·         The Hollies ‘Here I Go Again’: punchy Motown intro meets Liverpudlian beat-pop at its finest. Written by Mort Shuman and Clive Westlake, it was the band’s fifth single release and their second consecutive top 5 UK single (following ‘Just One Look’).

·         Manfred Mann ‘Pretty Flamingo’: although composed by American song-writer Mark Barkan, there is something very British about this song, with its Kinks vibe and fabulous, sing-along chorus. The recording featured future Cream bassist Jack Bruce, who briefly joined the band in 1965, and it gave Manfred Mann a UK No.1 in August 1966.

·         The Crystals ‘Da Do Ron Ron’: another song that will surely live forever, this big-chorus Wall-of-Sound production gave The Crystals a worldwide hit in 1963 (UK No.5, US No. 3). Much covered since, the song has appeared many times in Top 500 lists including Rolling Stone, Q Magazine and the Rock and Roll Hall of Fame.

·         Little Richard ‘Lucille’: This 1957 classic was covered many times by some of the biggest acts including The Beatles and Deep Purple. The track is pure Rock ‘n’ Roll heaven from King Richard: just check the comments on YouTube: “He may be gone today but we’ll have this forever” sums it up perfectly.

·         Eddie Cochran ‘C’mon Everybody’: simple, awesome groove, timeless. Originally a B-side, the song hit No.1 in the UK in ’59. Pop fact: the song is connected with Little Richard’s ‘Lucille’ by legendary drummer Earl Palmer, who played on both recordings…

·         Marty Wilde ‘60’s World’: this is an entirely new song, written and recorded by Marty for his new album Running Together. Marty was there at the beginning and is here now, having enjoyed a remarkable eight consecutive decades of success as an artist. Marty continues to play an active role in the UK music scene and has been nominated as an Ambassador for National Album Day (10th October 2020) alongside Pop Star daughter Kim.

CD1 WOULDN’T IT BE NICE

01 THE BEACH BOYS WOULDN’T IT BE NICE

02 CLIFF RICHARD & THE SHADOWS THE YOUNG ONES

03 THE HOLLIES HERE I GO AGAIN

09 EDEN KANE WELL I ASK YOU

10 THE KINKS DEDICATED FOLLOWER OF FASHION

12 PETER AND GORDON A WORLD WITHOUT LOVE

13 PETULA CLARKE I KNOW A PLACE

14 FRANK IFIELD I REMEMBER YOU

19 DUSTY SPRINGFIELD IN THE MIDDLE OF NOWHERE

20 ADAM FAITH WHAT DO YOU WANT

21 RICKY NELSON & THE BYRDS ALL I REALLY WANT TO DO

22 THE LOVING SPOONFUL SUMMER IN THE CITY

25 THE BARRON KNIGHTS CALL UP THE GROUPS

07 BOBBY DARIN IF I WERE A CARPENTER

10 THE SEARCHERS GOODBYE MY LOVE

11 THE MERSEYBEATS WISHIN’ AND HOPIN’

18 MARK WYNTER IMAGE OF A GIRL

22 THE TEMPTATIONS MY GIRL

23 THE PLATTERS ONLY YOU

24 LOUIS ARMSTRONG WHAT A WONDERFUL WORLD

03 BRIAN POOLE & THE TREMELOES DO YOU LOVE ME

04 THE EVERLY BROTHERS WALK RIGHT BACK

08 THE FOUR TOPS REACH OUT I’LL BE THERE

10 THE SUPREMES STOP IN THE NAME OF LOVE

12 THE RONETTES BE MY BABY

13 MARVIN GAYE I HEARD IT THROUGH THE GRAPEVINE

14 SMOKIE ROBINSON I SECOND THAT EMOTION

15 FRANK WILSON DO I LOVE YOU

16 THE VELVELETTES NEEDLE IN A HAYSTACK

24 BRENDA LEE SPEAK TO ME PRETTY

04 JOHNNY KIDD & THE PIRATES SHAKIN’ ALL OVER

11 JET HARRIS THE MAN WITH THE GOLDEN ARM

14 THE PRETTY THINGS HONEY I NEED

15 THE YARDBIRDS SHAPES OF THINGS

16 THE ZOMBIES SHE’S NOT THERE

17 THE EASYBEATS FRIDAY ON MY MIND

18 CHRIS FARLOWE OUT OF TIME

21 STATUS QUO ICE IN THE SUN

22 THE WHO I CAN SEE FOR MILES

25 THUNDERCLAP NEWMAN SOMETHING IN THE AIR

Finally, mention must be made of The Barron Knights who enjoyed enormous popularity in the 60’s and 70’s.

Their ‘pop parodies’ – sending up fellow bands including The Beatles, The Stones, The Searchers and many others – earned them millions of record sales – and perhaps surprisingly – many friends in the music business.

Far from causing upset to their rivals, The Barron Knights became hugely popular with many of the world’s biggest acts, owing to their skilful musicianship and arrangements that were humorous but never disrespectful.

‘Call Up The Groups’ – featured in this collection – parodied the Searchers, Freddie and the Dreamers, the Dave Clark Five, the Bachelors, the Rolling Stones, and the Beatles. The song imagined the various artists singing about being conscripted, or “called up” into the British Army.

Barron Knights singer and song-writer Pete Langford recalled “We had 17 copyright infringements and I went round on hands and knees to publishers pleading for permission to cover the various songs within our song!” His efforts paid off and ‘Call Up The Groups’ became the band’s first hit, reaching No.3 in 1964.

This, together with all the other groups that have been called up for this collection, is music that truly will live forever.

THE BEAT ON THE BEAT