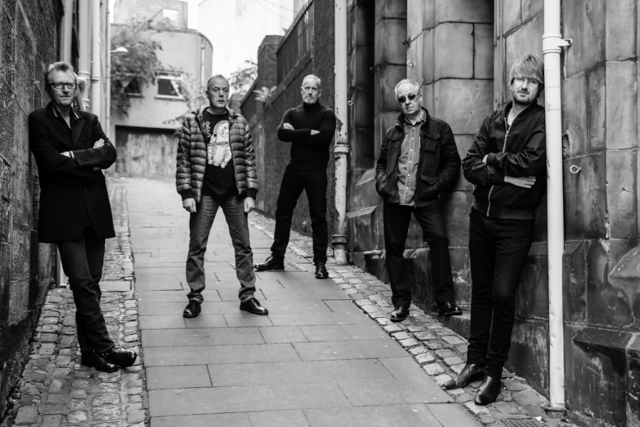 LISTEN TO SINGLE ‘A WORLD ON FIRE’ HERE

Four decades after they formed – in the white-hot summer of 1977 – Skids – are back.

The post-punk pioneers, currently on a hugely successful comeback tour, with head to Cardiff’s Tramshed on 8th June following the release of their long awaited fifth album ‘Burning Cities’ in 2018.

Tickets for the show are available here: http://www.the-skids.com/tour

“I’m incredibly excited about this album. This music is at the heart of everything our band is about: truth, revolution, loud guitars and a refusal to keep quiet as the establishment tries to smother chances for anyone other than its own.” – Richard Jobson

The new album release coincides with the fortieth anniversary of the first-ever Skids record, the ‘No Bad’ EP, which introduced the Scottish post-punk pioneers to a whole new audience courtesy of one of their biggest fans, Radio 1’s legendary new music champion John Peel.

Skids signed to Virgin Records in May 1978 and that same month the band recorded a session for John Peel that included songs such as ‘The Saints Are Coming’, ‘Of One Skin’ and ‘Contusion’ and set out an innovative template for the post-punk era. “We were fearless in the beginning,” recalls Jobson, who was still just seventeen years old when Skids recorded their first Top Of The Pops appearance for their Virgin debut “Sweet Suburbia’

Released in February 1979 the band’s debut album ‘Scared To Dance’ was a masterpiece of brooding atmospheres and anthemic lung-busting moments such as the irresistible ‘Into The Valley’, which gave the band their first Top 10 hit.

Mike Baillie took over on drums for the third Skids album ‘The Absolute Game’ – which combined the best aspects of both their previous albums, particularly on singles such as ‘Circus Games’ and the brilliantly inventive ‘Goodbye Civilian’. Though Adamson left to form Big Country during the initial recording sessions, the band managed one more album, ‘Joy’ (which itself included superb singles such as ‘Fields’ and ‘Iona’), before dissolving.

While Adamson went on to million-selling success with Big Country, Jobson formed the much under-rated Armoury Show with John McGeoch before going on to become a hugely successful independent movie director with acclaimed cinema releases such as 16 Years Of Alcohol, The Purifiers and Wayland’s Song.

In the summer of 2017, to celebrate the fortieth anniversary of the first-ever Skids gig, the reunited band set out on tour, selling out iconic venues such as London’s Roundhouse, Glasgow’s ABC and Nottingham’s Rock City. The shows were a triumph, full of joy, adrenaline thrills and an urge once again to kick against the pricks.

“In 1977, we were singing songs about what we saw as a world in crisis”. says Jobson today. “Today that message is more relevant than ever. ‘Burning Cities’ is packed full of punk rock protest songs. It’s an album we’re very proud of – and we can’t wait to share it.”