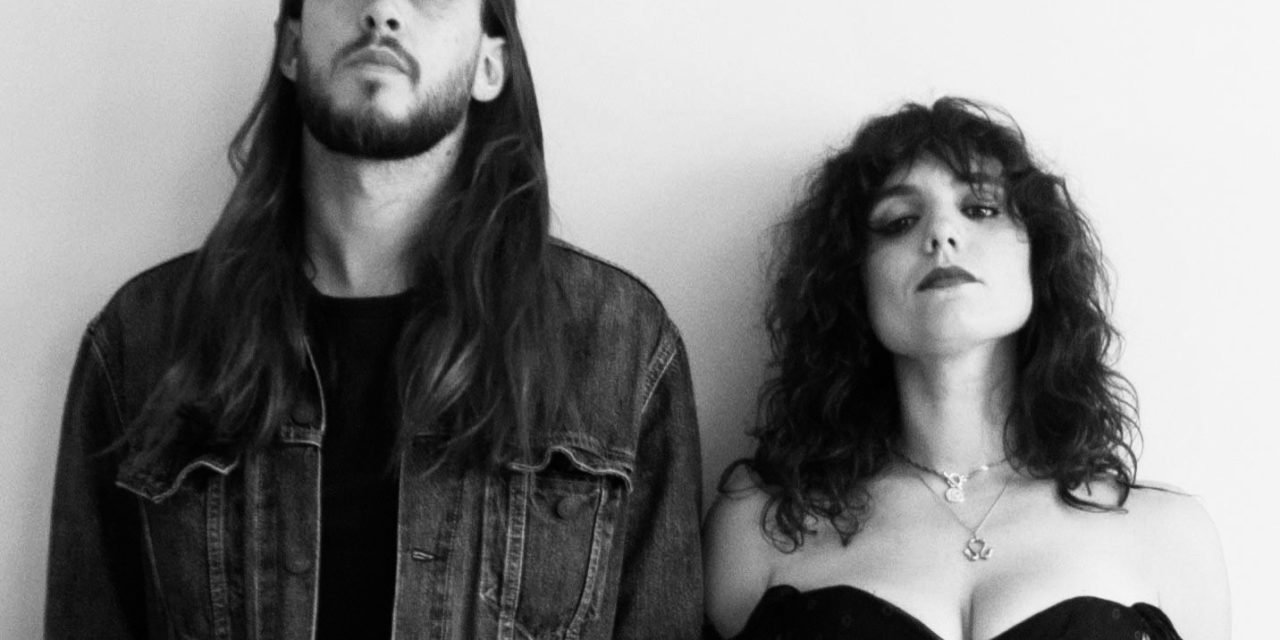 Offering one final glimpse into their debut album ‘Late Night Calls’ — set for release on 29 April 2022 — “Halo” is a climactic new cut that builds to a colossal conclusion.

Dealing with the anxiety of leaving your comfort zone and surrendering to something new, “Halo” stirs to life as a delicate and dynamic ballad before building into a theatrical and thumping expanse that blends tender vocal harmonies with wall-of-sound instrumentals.

Touching on a range of influences plucked from literature including the fabled river Styx from Greek mythology and Murakami’s surrealist novel ‘Hard Boiled Wonderland’ and even nods to the far-out fantasy of Jim Henson’s ‘Labyrinth’, “Halo” deftly blends the real with the surreal and boasts Sam and Sarah Gotley’s breadth as writers as much as instrumentalists.

Of the track’s creation, the husband and wife duo explain:

“Like ‘Labyrinth’, in the song it feels like there’s a woman lost in another place and a man who rules over it. In most of our writing there is a narrative that runs throughout and provides a metaphorical theme. In this case we really did have this surreal vision of an underworld in our heads when we wrote it, and we tried to make the music match by adding in things like key changes and a bridge that was completely different sonically to the rest of the song. But it is also figurative for how it feels to willingly surrender yourself to something new; something dark that takes you out of your comfort zone. People tend to shy away from moments like that in life, although they often provide us with extremely profound experiences.”

With its dramaturgic drum beats, driving guitars and arresting vocal delivery — tied together with an operatic string section — “Halo” reaches a dizzying and danger-tinged crescendo reminiscent of an old Victorian melodrama, or an ominous and long-forgotten black and white film.

The single also arrives with a suitably noir official video directed by Jarred Figgins and filmed in the Hellfire Caves in High Wycombe, where serendipitously some of the original ‘Labyrinth’ movie was also filmed. Watch the video here.

Cinematic and stirring, “Halo” is a fourth and final glance behind the curtain at Blue Violet’s Rob Ellis (Anna Calvi, Marianne Faithful, PJ Harvey) produced debut LP, set for release via Me & My Records on 29 April 2022.

With the album’s earlier offerings boasting the band’s ability to navigate a range of diverse and delicate themes, Blue Violet’s songs have been likened to a range of musical greats, from the expansive compositions of shoegaze maestros Slowdive to the dusky mysteries of country-rock enigmas Mazzy Star. The band have also received airplay on BBC 6 Music (Steve Lamacq) and praise from the likes of Vinyl Chapters, who described last summer’s “White Beaches” as “a hypnotic gem of wistful pop that creeps out of its shell in a mesmerising way”.

With absorbing narratives that traverse genres, ‘Late Night Calls’ exemplifies Blue Violet’s expert abilities for crafting intricate songs with subtly-experimental sounds. Touching on themes of beauty and heartbreak, love and salvation, it marks the start of what promises to be a captivating new story in music. As Sam and Sarah say:

“It feels like this album is the start of something long and fruitful and that we’ve found out who we are and what we want to say.”

Featuring contributions from a cast of skilled collaborators including Rod Brakes (on lead guitar and bass duties) and Portishead’s Jim Barr, ‘Late Night Calls’ was recorded at Devon’s Middle Farm Studios over the course of a month in 2019 and finally arrives in the Spring of 2022.

With a full UK tour planned around the release and Summer festival appearances (including multiple sets at Glastonbury 2022), catch Blue Violet performing material from ‘Late Night Calls’ at the following live fixtures from later this month:

Blue Violet are husband and wife duo: Sam & Sarah Gotley. Previously performing under the guise Broken Bones Matilda, the pair put-in noteworthy performances at Glastonbury, Belladrum, Pub in the Park, Carfest and Wilderness festivals to name a few before regrouping to form Blue Violet. Sarah, a Scot with Parisian roots, teamed up with Sam a few years ago and between then and now the duo have lived between London and Sarah’s childhood home in Argyll, where they have been busy writing their next chapter.

After a string of sublime singles including “White Beaches”, “Poster Girl”, “Asylum” and “Rabbit Hole” (plus a few exceptional cover versions of Edwyn Collins and the Everly Brothers), Blue Violet will finally release their debut album ‘Late Night Calls’ this Spring.

WATCH THE VIDEO FOR ‘HALO’ HERE