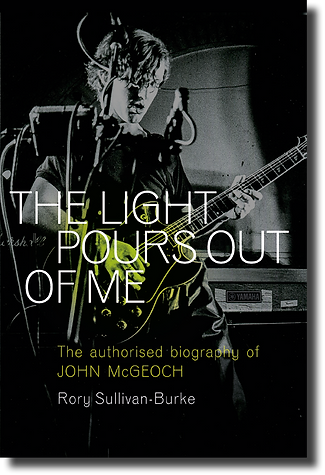 John McGeoch sits on a pedestal as one of the most creative forces in rock music. Admittedly, his name is not at the top table of fame, but those sublime talents certainly rest on their own throne. Please do not confine his achievements to a period or a style, for his influence goes across the board.

His work primarily with Magazine, Visage, Siouxsie & the Banshees, The Armoury Show and PIL has been noted by many and in essence has had a positive effect on the work of Johnny Marr, Red Hot Chilli Peppers, Radiohead, Steve Albini, Peter Hook, Mark Arm and Roddy Frame among many others.

Luminaries from that illustrious list above have spoken through frank and flowing prose in an excellent and entertaining book – The light pours out of Me. This text comes from the pen of Rory Sullivan-Burke and explores the life of the sadly deceased and sorely missed McGeoch – and, as a first effort from the author this release leaves us eagerly awaiting further written projects.

John was a Scottish talisman and as a young man he headed south to study in a burgeoning 70’s Manchester and then through a variety of means he embarked on a musical career that broke barriers and helped both form and progress the post-punk genre. The skills of this sonic soldier took his aural adventures far and wide leaving a major mark on the musical map. Studied by many, but unable to be copied his majesty also paved the way for the likes of U2’s The Edge, Dave Navarro, William Reid, James Dean Bradfield, Duane Denison and Terry Bickers to follow.

An unbridled scope was the level of the McGeoch imprint and with contemporaries such as Keith Levene and Andy Gill, the art of guitar playing was redefined from the late 70’s onwards. Ostentatious solos were no longer the order of the day even if sadly they are still around in 2022. A more autonomous application was applied where the six stringed sword did not have to dominate but it could be an integral component in the soldering of a sound that played as part of the whole instead of being a showpiece for flash practitioners. Yes, that instrument could come to the fore but so could other features of the new order. The whole unit could play as one force together with each individual playing a role at the front or in union.

John could turn his hand to whatever he attempted such was his diversity, but as many in the rock n roll community the vices took hold and that meant copious amounts of drugs but possibly here even more excessive drinking.

MeGeoch was caught up with some large characters in the bands with whom he worked. Howard Devoto, Siouxsie Sioux, Richard Jobson and John Lydon were among the crop. The tartan terrior was not prepared to be a voice in the wilderness, but he also hit many brick walls with other larger egos and then his own demons added to the chaos, confusion and calamity.

However, he has a lustrous legacy through such albums as: Real Life, Secondhand Daylight The Correct use of Soap, Visage, Kaleidoscope, Ju Ju, A kiss in the Dreamhouse, Waiting for the Floods, Happy, 9 and That what is Not as well as other collaborations with acts such as Gen X, Ken Lockie, The Skids, Peter Murphy and The Sugarcubes.

There is so much more to this biography as it steps outside the music and delves into John’s bond with his family, his relationships and their ups and downs plus his love for his daughter Emily.

It is thanks to Rory for bringing us the tale of a man who gave so much but was not necessarily rewarded accordingly and as such drifted away from the scene to head back in to civilian life – and, eventually Fade to Grey as he sadly passed at the tender age of 48 in 2004.

Artistic – without a call for the limelight, a desire to succeed without an ambition to court publicity, a mind for detail and hands of gold – ladies and gentleman it the late, great John McGeoch. Please read this remarkable record about the man who delivered the Rhythm of Cruelty but also suffered at its fate.