Not long ago, I introduced you to the *’Signals’ *single from rising
post-punk shoegaze hybrid outfit *HOLYGRAM*. Today I am pleased to present
their new single *’A Faction’*, offering another delicious soundbite from
their debut album *’Modern Cults’*, slated for released on November 9
via *Cleopatra
Records*. However, I present you the full album to download for review &
playlisting purposes. *DOWNLOAD *http://bit.ly/2O2XsD4

I am also attaching two albums from Glass Records family:
*SPIRITUALIZED* *’Fucked
Up Inside’ *comes via Glass Redux and *THE VENUS FLY TRAP ‘Icon’ LP* comes
via Glass Modern Records. Both bands were pioneering in their respective
genres, the first in space rock/ shoegaze and the second in electronic
post-punk (like a mix of PIL and Attrition).
*DOWNLOAD SPIRITUALIZED *http://bit.ly/2DFXCvj
*DOWNLOAD THE VENUS FLY TRAP* http://bit.ly/2poabRZ

Do write about, spin, share this music far and wide in whatever capacity
you can. Please let me know if you’ll be supporting? Quick access to press
materials, including streaming and downloads:
https://shamelesspromotion.haulix.com/Media/Link?h=5RjITwJrLIsgIJCMb+i8iY7LVvBJDXb3vYrWHuqu6KE=

*FOR FANS OF:* The Soft Moon, The KVB, Sisters Of Mercy, My Bloody
Valentine, and The Jesus & Mary Chain
*FOCUS TRACKS:* Still There, Signals, A Faction, Hideaway, Dead Channel
Skies
*All photos by Yves Christelsohn*

*”There is something incredibly enticing about a band who so seamlessly
combines New Wave, post-punk, Krautrock, darkwave, and shoegaze. The result
is a heady dose of reverberating ecstasy”* – *Big Takeover Magazine
<http://bigtakeover.com/news/VideoPremiereAFractionbyHOLYGRAM>*

*”Holygram take us on an intoxicating, spine-tingling ride that is filled
with gloom, mystery, and ecstasy. And all you can do is close your eyes and
dance within the mysterious soundscape”* – *The Revue
<https://therevue.ca/2018/10/09/the-matinee-18-october-9th-part-2/>*

German post-punk shoegaze outfit *HOLYGRAM* <http://holygram.band> present *’A
Faction’* <https://youtu.be/NxjZgth7b6w> – the second single off their
long-awaited debut LP *‘Modern Cults’*
<https://holygram.bandcamp.com/album/modern-cults>. Comprised of eleven
tracks, this album will be released on CD and double vinyl, as well as
digitally via *Cleopatra Records*
<https://cleorecs.com/store/?s=holygram&post_type=product>, on November 9.

This news follows the lead single* ‘Signals’ <https://youtu.be/YcVfSe0cygg>*.
Prior to that, the Cologne-based outfit released their *self-titled EP
<https://holygram.bandcamp.com/album/holygram> *in 2016. HOLYGRAM cleverly
blends new wave and Krautrock with post-punk and shoegaze to achieve
headstrong multi-layered bliss. This is a thoroughly contemporary homage to
the sound of the ’80s with a resolute look to the future – the result is
driving, dark and catchy.

Produced by *Maurizio Baggio*
<https://www.discogs.com/artist/1531010-Maurizio-Baggio>, who also
produced *The
Soft Moon* <http://www.thesoftmoon.com>’s ‘Deeper’ and ‘Criminal’ albums,
this long-play was recorded at Cologne’s *Amen Studios*. The new video for
‘A Faction’ is produced by* WE OWN YOU GmbH <http://www.weownyou.agency> *and
directed by *Jan-Peter Horns* with animation by *Alison Flora*.

HOLYGRAM is *Patrick Blümel* (vocals), *Sebastian Heer* (drums), *Marius *
*Lansing *(guitars), *Pilo Lenger* (synthesizers) and *Bennett Reimann*
(bass). Formed in 2015, the band’s approach to making music references the
past, while remaining future-oriented. Hard-to-combine elements cleverly
come together to become the soundtrack of a city that appears threatening
in the twilight.

The new album intensifies HOLYGRAM‘s contemplation of themes such as big
cities, alienation and anonymity, hope and memories, love and identity.
These reflections interact closely with the band’s unmistakable signature
sound. Atmosphere oscillates between the brutal sounds of the big city and
the fragility of the people that lose themselves in it – intelligently
observed scenarios of a world falling apart in which individuals have long
ceased to play a leading role.

The band recently accompanied British synthpop legends *OMD* on their 2017
European tour and have played numerous festivals, including Mailfeld Derby,
Wave-Gotik-Treffen and New Waves Day. Wrapping themselves in dense wafts of
mist and cool lighting on stage, they’ve made quite a name for themselves
on the live circuit.

As of November 9, the ‘Modern Cults’ LP will be available everywhere, but
can already be ordered via *Cleopatra Records* on *CD*
<https://cleorecs.com/store/shop/holygram-modern-cults-cd> and *vinyl*
<https://cleorecs.com/store/shop/holygram-modern-cults-2-lp>, and also
digitally via *Bandcamp* <https://holygram.bandcamp.com/album/modern-cults>.
The album will be released in Europe via *Oblivion / SPV*.

HOLYGRAM will be touring Europe and US/Canada this fall with one of the
biggest electronic bands on the planet, *VNV Nation*
<http://www.vnvnation.com>, as well as *DE/VISION* for the North American
tour. They will hold two release shows – the first, in Cologne on Nov. 9,
marks the end of their European tour, while the Los Angeles release show on
Nov. 14 (at The Viper Room) kicks off their North American tour. 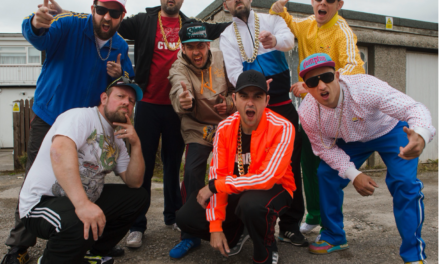