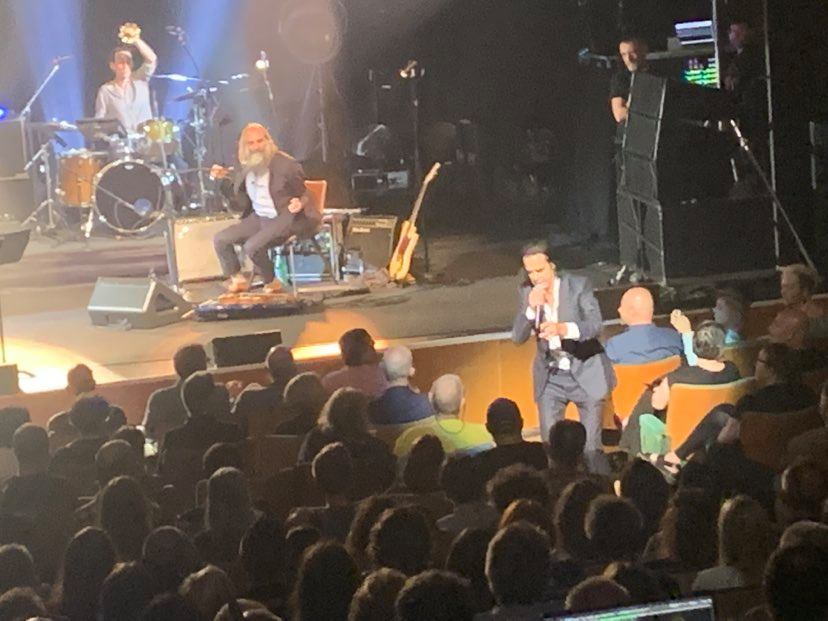 Nick Cave resides in that unique territory where he can flitter between the polar opposites of heaven and hell while seemingly having a foot in either camps. This sonic survivor has a bank of skills that has had him turn from a young punk-goth rebel to into a suavely attired cultural phenomenon. As the years have progressed Cave has filtered from the approach of a deep and dirty noise into a pensive and precise poise. Although, the towering presence of this alternative Australian ambassador can still shift from subtle to sledgehammer with the greatest of ease.

His seamless slide from the angelic to the demonic comes in the form of language and/or music. There is no need to ram home a message with a raucous backdrop when it can come with specific wordplay that carries a killer blow. However, if there is a need to ramp up the volume to add vehemence to the vocabulary then Cave has the toolkit to turn it up!

The current partnership with long term collaborator Warren Ellis has provided 2021 with the majestic ‘Carnage’ album and on the back of this eight track elegance comes a tour. Although Cave is the dominant feature it is difficult not to cast an eye on the contribution of Ellis both on and off stage. This dexterous duo have united across 16 albums and their unity is evident whether in the momentum or minimalism.

It is strange that Cave has seemingly avoided Wales and the call of the capital city during his career. Nonetheless, he has built up a new bond with the principality via his ‘Conversations With’ show of 2019 at The Wales Millennium Centre (he was set to play the Motorpoint with The Bad Seeds until the pandemic wiped that out) – and now he has joined Ellis at St. David’s Hall. Long may this trend continue…because a night with Nick and his associates is an event to savour.

For many including your truly it was a first concert going experience for a long time (two years here!) and, it is daunting to witness masks aplenty in a venue. However, for artist or audience it is not an easy ride and Cave thanks the fans for their support in these traumatic times. Even though he can come over as doom and gloom the man in black showed his sunny side with various outbursts of humorous asides, audience interaction and even turning the title of the tune ‘Albuquerque’ into Cardiff.

As regards the sonic tonic our hosts delivered their diligence largely though the mediums of ‘Carnage’ and the last Bad Seeds long player ‘Ghosteen’. Other offerings from the back catalogue unleashed anthems such as ‘God is in the House’, ‘Henry Lee’ and ‘Into my Arms’, plus there was a nod to the Grinderman project alongside a stripped down version of the T. Rex classic, ‘Cosmic Dancer’.

The multi-instrumentalist Ellis sat playing on his lap, additional band member Johnny Hostile proved his skill base across a range of musical equipment and a vocal trio of Wendi Rose, T Jae Cole and Janet Ramus offered ethereal endeavour to heighten the drama.

The gentle tones dominated the day but when it came to up tempo the stage turned into a fire of fury as ‘White Elephant’, ‘Hand of God’ and ‘Hollywood’ stomped with a vibrant vigour. From here Cave dived and danced like a dervish as the bushy beard and frantic feet of Ellis rocked to the rhythm.

As a result those in attendance revelled – and, the cries for an encore were stratospheric which led to a brace of re-appearances – and, a further five tunes! Two hours clocked up but the performers were seemingly so glad to be on stage and lap up adulation that there could have been more in the locker if allowed. However, it was 10.30pm and the night had to close after a lengthy and lustrous set. Cave had explored an array of topics surrounding the human form while at the piano or away from the keys as his comrades brought the support mechanisms for the star man to shine bright on a Sunday night!