The South Wales girls’ tennis team had a successful weekend (1st March) at the County Cup in Sheffield. The girls were up against teams from Gloucestershire, Leicestershire and the West of Scotland, and they were led by team captain Melissa House from Penarth.

The girls finished Friday with an overall score of 6-3 against Gloucestershire, and faced the Leicestershire team on Saturday. The singles matches ended in a tie 3-3 again, with wins from Amy Leiu (6-4, 6-2), Alice Warren (6-4, 7-5) and Alex Oelmann (6-7, 6-2, 6-0). The South Wales team also dominated the doubles matches with wins in two out of three matches by pairs Alex Oelmann and Joely Lomas, who won 6-2, 6-1, and Amy Leiu and Alice Warren, who won 6-3, 6-3. Newcomer Poppy Davies from Cardiff also played her first County Cup doubles match with Meryl Bird.

The girls brought home the golden trophy for South Wales, and also got promoted. “Promotion is great for the team as it means the girls will be able to compete at a higher level next year, and also rewards them for their commitment and endeavour – particularly over the County Cup weekend,” said team captain Melissa House.

“It also encourages the players to continue with the sport and gives them confidence and excitement going into the next year. It was the perfect end to a great three days in Sheffield.”

Congratulations are particularly in order to Alice Warren, who won all six of her matches in what was her first under 18’s County Cup, and last year’s reserve Alex Oelmann, who won all five matches. 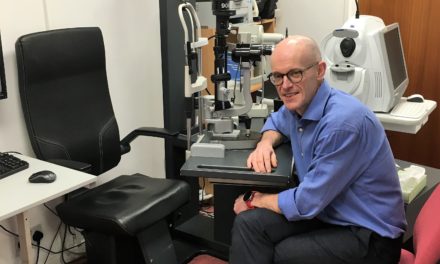 A UNIFIED approach to optometry will be the future of eye-care in Wales.