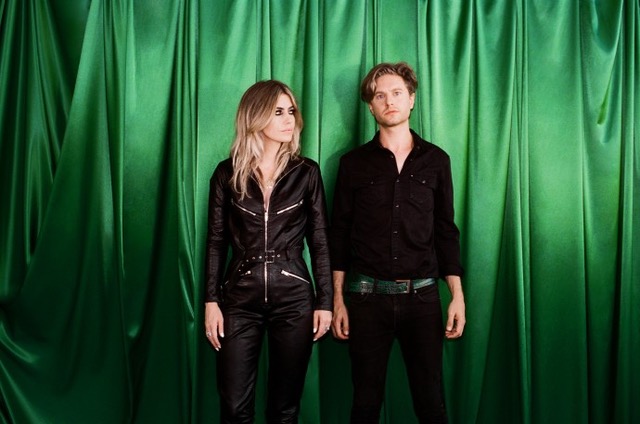 NEW ALBUM ‘GET TRAGIC’ OUT NOW

“Kid Don’t Be So Shy” is the new stand alone single from BLOOD RED SHOES following the success of their fifth studio album, ‘Get Tragic’ released earlier in 2019.

The new single takes Laura-Mary Carter and Steven Ansell into a new industrial dance direction and features guitar and extra vocals from Los Angeles based alt-rocker Queen Kwong (whose supporters include BBC Radio 1 and Nine Inch Nails’ own Trent Reznor amongst others). Queen Kwong joins the band on their headline European and UK Tour that begins in La Rochelle, France on Oct 28 – and ends in Cardiff, Wales on Nov 23.

“This song is a club tune at heart, built around one synth bass loop which repeats and grows and breathes but never deviates from the same hypnotic rhythm. It’s two punk rockers trying to make dance music so it came out a bit warped and strange and dark that’s exactly the way we like it.” – Steven Ansell

On the back of the band’s own sold out tour earlier this spring and before they head out on their next extensive headline tour (ending with a 9-date UK run) Laura-Mary and Steven are now back on the road touring mainland Europe as PIXIES’ Very Special Guests.

Blood Red Shoes’ newly reinvigorated sound sees the Brighton duo injecting their raw rock and roll, and visceral songwriting, with keys and synths galore (a change that came by accident, thanks to a motorbike crash that saw guitarist Laura-Mary Carter breaking her arm – just one of many trials and tribulations to have befallen the band since their last album four years ago). Widespread radio support for the new material – including previous single “Eye To Eye” – has come from the likes of Steve Lamacq, Marc Riley, Chris Hawkins, Shaun Keaveny and Huw Stephens on BBC 6Music, to add to official playlisting and heavy support from John Kennedy on Radio X, while press have been going wild for the return of the band.

Accidents, heartbreak and a career curse plagued Blood Red Shoes on the road to their new LP, the appropriately-, knowingly-titled Get Tragic. Relentlessly gigging off the back of their self-produced and self-titled fourth album, the heels fell off Blood Red Shoes at the end of 2014. A near-decade of incessant road time and a non-stop pace of life finally took its toll. Stopping only to quickly hammer out “another ten songs” to release as their next record, before ploughing straight back into touring, the pair exhausted themselves to the point of collapse. “We got the to the end of the fourth record and were like, ‘F**k you, I never want to see you again’,” says Steven, half-laughing, half-sighing.

Laura packed her bags and bought a one-way flight to Los Angeles. She fell in with a songwriter’s crowd, penning tracks and collaborations with big-time pop producers. Steven, conversely, “went out and took drugs and went clubbing for about half a year… I don’t remember a lot about it. Classic break-up move, right?”… “The reason we called the album Get Tragic is because we realised that everything we’ve been doing over the last three years is kinda tragic! Just like, ‘Ooh, I hate you, I’m going to America to find myself’, and like ‘Ooh, I’m gonna party for the rest of the year!’ Everything about it is such a cliché – we were like, ‘We’ve turned into a f**kin’ tragedy!’”

Get Tragic, then, fully embraced the absurdity of Blood Red Shoes’ situation. As a result, the pair have come out the other side sounding fresher and more assured than ever. Recording in the States, working with producer Nick Launay (Yeah Yeah Yeahs / Arcade Fire / Nick Cave and the Bad Seeds), ditching the two-piece rock rulebook they arguably helped write – everything that went into Get Tragic was a leap into the unknown. The wealth of songs that came out of the sessions were the duo’s light at the end of the ever-expanding tunnel. More melodic and synth-led than any of the band’s records to date, and with Carter singing more than ever before, the new record embraces electronics and nuance in a way their stripped-back and stomping two-piece rock sound of old never could have – and the incredible songs from this album just keep on coming.